Why The Touch Of Grand Pianos Are Better

Why The Touch Of Grand Pianos Are Better…

It is a common enough question and is often the subject of many pianists conversations:

“What type of piano has the superior touch… The upright or the grand?”

The upright piano houses it strings in a design that makes them vertical to the ground. Because of this the action sits in front of the strings and the hammers sit at an approximate 45-degree angle to the floor. In a grand piano the strings are housed parallel with the ground and the action sits underneath the strings. The hammers rest at a 45-degree angle below that of the ground. This basic 90-degree variation of the positioning is significant in the response and consistency Between the two pianos.

The inside of a 2002 Boston designed by Steinway grand piano. This grand piano featured in our December auction and sold for £4,700.00

Upright instruments will always rely on the ‘spring and lever’ action. Springs can wear out and alter the playability & worth of the instrument, however the grand piano is designed in such a way that it employs the use of gravity, which is an unrestricted and perpetual power and simply can’t wear out!

This in return demonstrates that grand pianos have a repetition and sensitivity advantage over uprights. 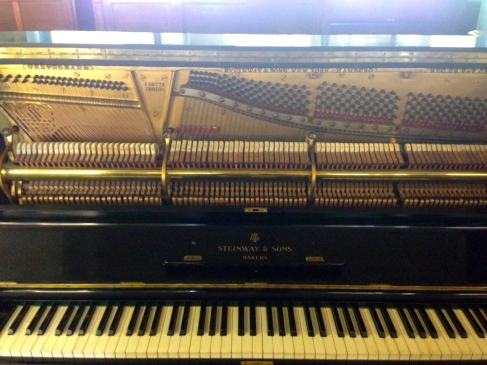 The ‘spring and leaver’ action can be seen here on this Steinway piano that was pictured for an earlier BPA auction package.

Be in no doubt however that the design of the upright action is excellent in todays instruments. Nonetheless when a player is ready to master the more serious works of the repertoires its mechanism will offer a noticeable limitation on a players ability to perform.

Most students of the piano begin by learning on an upright instrument, there is a reason why the music colleges have uprights in almost every practice room!

Not everyone plays to the most advanced of standards. However it can not be denied that there is a ‘progress advantage’ to practicing each day on a grand piano.

This entry was posted on January 22, 2014, 8:31 am and is filed under Education, Pianos. You can follow any responses to this entry through RSS 2.0. You can leave a response, or trackback from your own site.