Posted by Britannia Piano Auctions in Uncategorized on May 29, 2014

A 4ft 11 grand piano finished in a black polyester case and raised on square tapered legs. This model A1 piano is listed at a fantastic opening estimate.

With a month until the UK piano auction in Manchester it is time to be thinking about the piano for you.

If you have any questions about this auction insight or any other please don’t hesitate to contact us on:

An online listing will be on the website two weeks prior to the auction. However, our fully illustrated catalogue for the April auction is available to purchase from us by telephone or email and is delivered to your door at a cost of £5.00 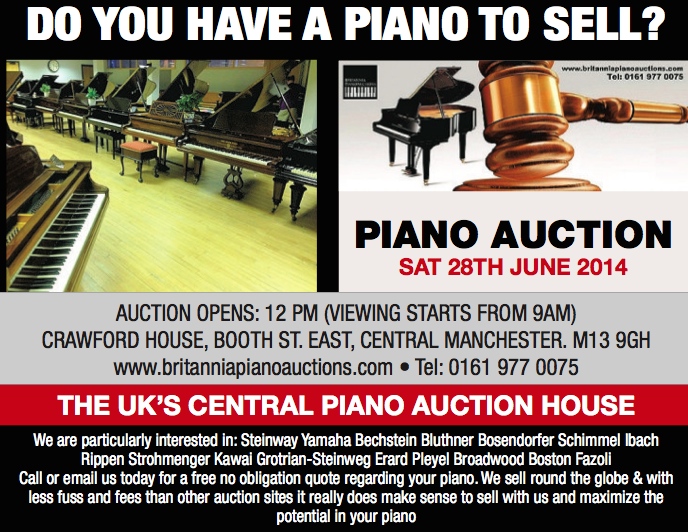 Posted by Britannia Piano Auctions in Education on May 10, 2014

Imagine asking your piano tuner to tune piano trichords like this? Why? It is enough to make any technician or pianist with perfect pitch quiver where they stand. To request that your piano is tuned in this fashion is almost unthinkable, or is it…

The ‘Honky-tonk’ style of piano playing relied on this distinctive tuning process, the basic idea being that the piano’s tuning was altered to make the instrument sound like an exhausted untuneable piano. The irony of this is if the piano was exhausted and untuneable, any pianist attempting to play Honky-tonk piano would have a far from enjoyable time ahead.

Origins of The Term

The earliest known use of the word was in an American newspaper report in 1889. In this report the local community called for the ‘Honky-tonk theatre’ to be reopened. The term is still used today to describe certain types of bars in America too, mainly bars that provide entertainment in the form of country music (common in the southern and southwestern United States).

It has its roots firmly in the style of ragtime, the emphasis is on the rhythm rather than the melody & harmony. It is a cheery and percussive style that is almost never at a slow tempo, and can, in the hands of the accomplished player be a justification to embellish the original melody in exuberance. The style evolved out of an environment where pianos were poorly treated and cared for. These pianos also tended to be out of tune. The style was the platform for the birth of the later Boogie Woogie style that came to popularity in the late 1930 through the early 1950’s (though records do indicate that it can be traced back further).

Certain household names in England made a living out of requesting such a distinctive tuning process. Winifred Atwell who was a Trinidad and Tobago born pianist from the town of Tunapuna (think there might be a joke in there somewhere!) enjoyed great popularity in the UK, USA & Australia from 1945-1980 playing Honky-tonk piano.

Originally a fine classical player who travelled to the United States to study with Alexander Borovsky and, in 1946, moved to London, where she had gained a place at the Royal Academy of Music. She became the first female pianist to be awarded the Academy’s highest grading for musicianship. To support her studies, she played rags at London clubs and theatres. These modest beginnings in variety would one day see her topping the bill at the London Palladium. She attracted attention with an unscheduled appearance at the Casino Theatre, where she substituted for another star who was at the time unwell. She caught the eye of an entrepreneur who put her on a long-term contract. She released three discs which were well received. The third, “Jezebel”, scurried to the top of the best seller lists. It was her fourth disc that catapulted her to huge popularity in the UK. Winifreds career was never destined to be on the concert platform performing the classical repertoire.

Winifred not deterred from playing, took to the Honky-tonk style and made it her own selling over 20 million records. She was the only female instrumentalist to have a number one hit in the UK and is still the only one to do so. Here she is performing the ‘black and white rag’ live through various stages of her career.

Another corner stone of the Honky-tonk style was… 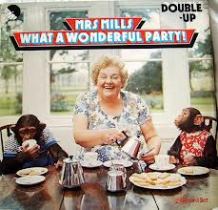 Gladys Mills was an English pianist who found fame through the 1960s and 1970s playing the Honky-tonk style. Mrs Mills was discovered while working as the superintendent of the typing pool in the Paymaster General’s office in London in the early 1960s.
Her catchy piano style and jolly, happy-go-lucky personality won over a talent scout who saw her performing at a Woodford Golf Club dance near her Essex home in Loughton in December 1961.
After signing a management contract to Eric Easton (who later managed The Dave Clark Five and The Rolling Stones), Mrs Mills was snapped up by the Beatles’ record label Parlophone.
Her first single “Mrs Mills Medley” entered the UK Top Twenty, and was a piano medley of the songs:

I Want to Be Happy
The Sheik of Araby
Baby Face
Somebody Stole My Gal
Ma He’s Making Eyes at Me
Swanee
Ain’t She Sweet
California Here I Come.

Here is the original Parlophone recording:

The song reached number 18 in the charts and was the first piano medley to bother the Top 20 since Russ Conway’s Christmas ivory-tinkler in 1959.

A classic number of the Honky-tonk repertoire is Kitten on the keys: 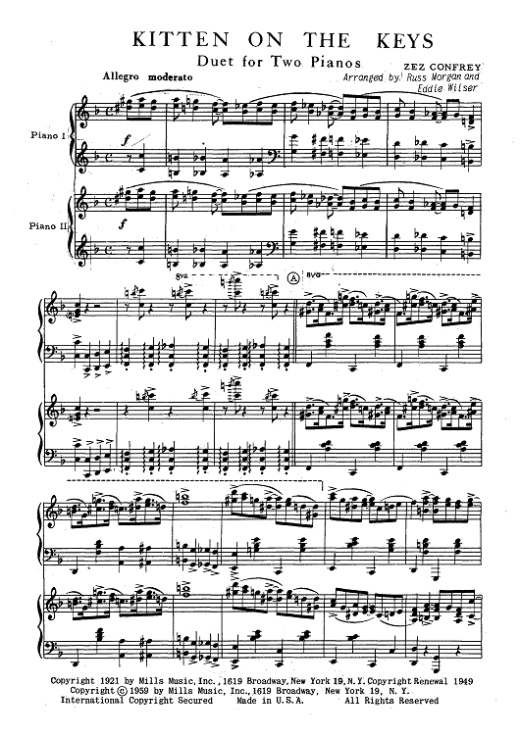 Though the sound of the Honk-tonk piano is now available at the click of a button on most modern electronic keyboards, there is still nothing quite like the traditional acoustic sound that resounds from a piano. It is a piano tuner’s nightmare to be asked to tune a piano in this way. All of those years correcting the problem of out of tune pianos, to then be asked to do the opposite, most of them see this as sacrilege!

As a friend of mine said “It is rather like asking Michelangelo to emulsion your spare bedroom”. However it cannot be denied that Honky-tonk still has its place today as a cheery feel good style of piano playing that if played well requires a lot of skill and a high level of ability.